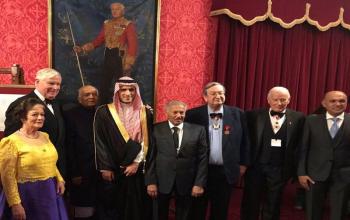 The International Organization of Peace and Social Justice granted this year’s appreciation award to Saudi businessman Sheikh Abdullatif bin Ahmed Al Fozan for his contributions to various charitable fields and his ongoing support for the community.

The award was presented to Al Fozan to culminate his continued generosity, which contributes to the development of people and nations and helps meet the needs of individuals and families.

These efforts are embodied in a series of programs and initiatives that Al Fozan launched and nurtured, most prominently the establishment of the Al Fozan Academy for the Development of Leaders of Non-Profit Organizations, the Al Fozan Autism Center with a capacity of 240 cases, and the Abdullatif Al Fozan Award for Mosque Architecture, which seeks to explore the different influential trends in the development of mosque architecture and has motivated architects, engineers, planners, and designers around the world to develop mosques in an innovative and sustainable manner. In addition, he launched the Al Fozan Affordable Housing project to provide housing units to underprivileged families and help residents become self-sufficient and form economically productive families.

He also contributed to launching the first food bank Eta’am, which distributes surplus foods in an optimal manner and spreads awareness on the importance of preserving food. The food bank also launched the Food Academy Initiative, which helped create new experiences in food manufacturing and preparation.

The International Organization of Peace and Social Justice is a non-profit institution that seeks to promote global peace and safety by promoting dialogue on economic and cultural issues to drive consolidated cooperation between people and provide ways for advancing developing societies.

The organization honors a global figure every year in appreciation of their efforts in different facets of charity work.