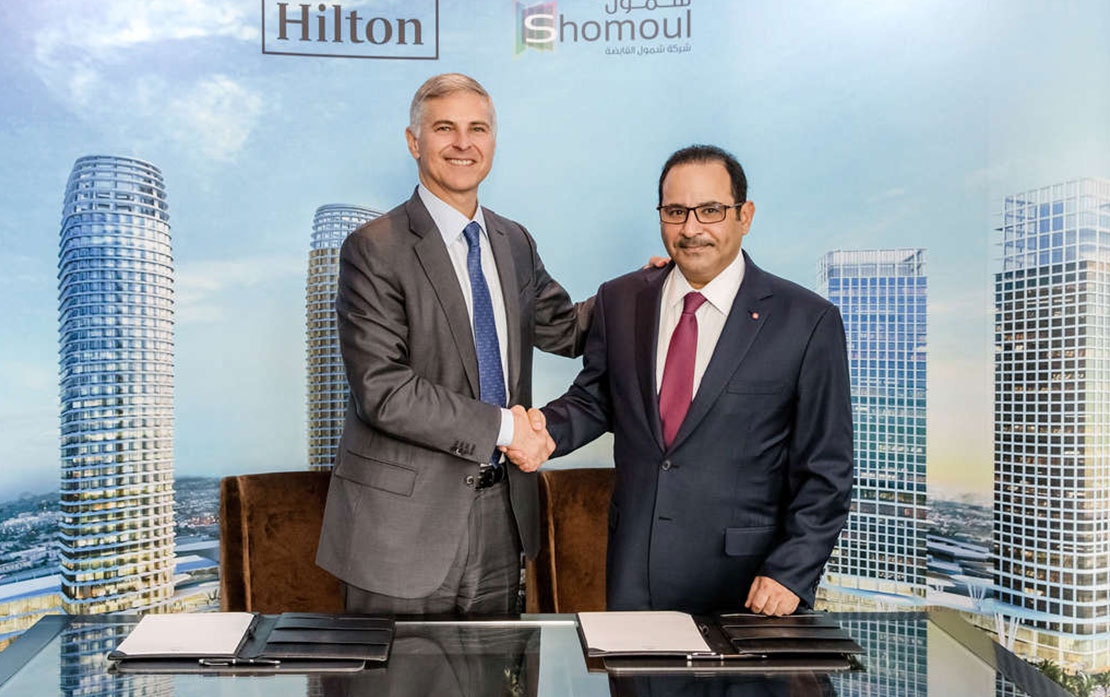 Hilton to operate its Waldorf Astoria, Conrad and Hilton Garden Inn brands, and introduce its Canopy by Hilton brand to Middle East at signature development in Riyadh

Berlin, Germany and McLean, USA - Hilton and Shomoul Holding Company announced today the signing of a landmark agreement to develop and operate four hotels in The Avenues - Riyadh, the largest mixed-use development project in the Kingdom of Saudi Arabia. The development will include one of the world's largest malls, with a leasable area of approximately 400,000sqm housing more than 1,300 stores.

The Avenues - Riyadh is located at the entry point of the capital city, overlooking the intersection between King Salman and King Fahad Roads, and just a few minutes away from King Khalid International Airport. When completed in 2023, the project will be a beautiful architectural landmark in Riyadh, embodying the success of The Avenues - Kuwait, with its multiple districts and unique design. This mega project, with its different stages from construction to opening and operation, will create approximately 40,000 job opportunities.

The development will feature a mix of luxury retail, high street brands, in addition to traditional stores that are modelled on a traditional Riyadh Souk in respect to the region's traditional retail architecture. The design reflects Riyadh's contemporary lifestyle and culture, offering a diversity of districts, each designed in a different theme in harmony.

Hilton will operate four of its industry-leading brands at The Avenues - Riyadh, including a 350-room Waldorf Astoria, a 400-room Conrad - both offering Hilton's unique luxury experiences - a 500-room Hilton Garden Inn, and a 150-room Canopy by Hilton - the first of Hilton's lifestyle Canopy brand in the Middle East.

Speaking at the signing ceremony, Mohammed A. Alshaya, Chairman of Shomoul and Mabanee, said: "I am very proud to once again partner with Hilton at another of our ground-breaking Avenues projects in the region. The Avenues -Riyadh is a signature development offering a unique and ultimate lifestyle destination in the region, and will be the largest in our expansion portfolio. We believe that having four of Hilton's world-class brands as part of the towers will create an incredible destination for shoppers and travellers across the region and from around the world in Riyadh."

"The Avenues - Riyadh is an incredible opportunity for Hilton to bring four of our industry-leading brands to one development project for the very first time. I am especially proud that we are signing this unique project in our 100th year - our most dynamic year yet," said Chris Nassetta, president and CEO of Hilton. "Mohammed A. Alshaya and his team have been fantastic partners in this project and we look forward to doing our part to contribute to the Kingdom of Saudi Arabia's vision for tourism."

In accordance with the Saudi Arabian government's Vision 2030, The Avenues- Riyadh will promote and support increased tourism into the Kingdom, which currently accounts for some 9.4% of GDP and is expected to rise by almost 5% per annum for at least the next 10 years.