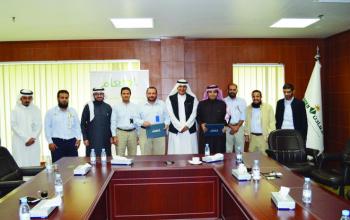 Ma’aden Phosphate Company, a subsidiary of Ma’aden, signed an agreement with the Saudi Food Bank (Eta’am) to provide surplus food to Ras Al Khair Industrial City. The food bank will receive food surplus from restaurants under the Ma’aden companies in the city and the restaurants of the residential village and redistribute it to preserve food and limit food waste. As per the agreement, Ma’aden will support Eta’am by providing the necessary equipment for collecting and transporting food to ensure the application of food safety standards.

The agreement was signed by the President of Ma’aden Phosphate Eng. Hassan Al Olay and the Executive Director of Eta’am in the Eastern Province Faisal Al Shushan in the attendance of several representatives of the upper management of both parties. Before the signing, an explanation was delivered regarding the role of Eta’am in serving the community. Eta’am General Manager Abdulaziz Al Nugaither expressed his thanks and appreciation to Ma’aden for this generous initiative that would contribute to the success of the Eta’am project by preserving food.

The agreement comes within the framework of Ma’aden’s commitment to social responsibility, and this partnership reflects the company’s complementary approach with entities specialized in implementing initiatives and programs emanating from its general strategies. The company is keen on making a significant positive impact by implementing targeted community programs according to special studies that provide societal and economic support in line with the company’s plans.

During the past years, Ma’aden has undertaken several social initiatives in all the provinces in which it operates. For example, in 2016 it allocated nearly SAR 28 million towards 24 initiatives, 17 of which have had a sustainable impact. Development and community service projects represented 55 percent of these initiatives while educational and training initiatives represented 35 percent.