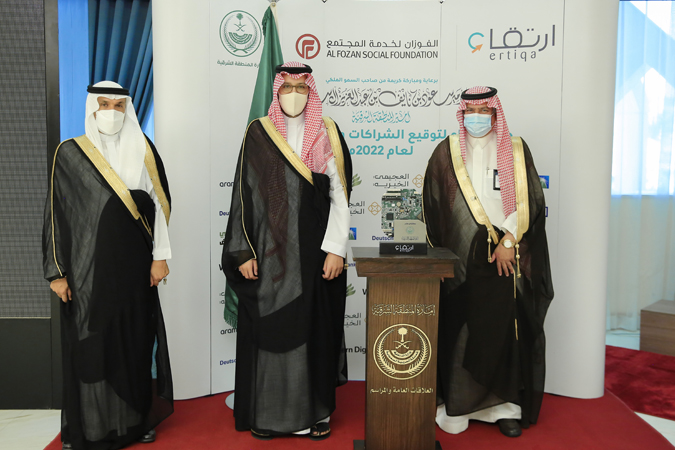 Ertiqa is a charity that refurbishes old and outdated computers and donate them to educational and social institutes.

HRH the Deputy Prince praised Ertiqa for the professional services they provide, helping to promote environmental preservation and supporting people in need by giving them refurbished electronic devices that help them keep up with the Kingdom’s rapid technological development in every facet, thanks to an advanced digital infrastructure that helped uprate the lives of citizens and expatriates alike.

Abdullah bin Abdullatif Al Fozan, Chairman of Ertiqa, said that the charity is the only one in the Middle East and North Africa that specializes in refurbishing computers.

Thanking Ertiqa’s partners and everyone who brought their best skills in to help their communities, Fozan said that Ertiqa had given away 25,000 computers to students during the COVID pandemic as part of the Nonstop Learning initiative.

Al Fozan thanked the Prince and Deputy Prince of the Eastern Province for their support of Ertiqa through the signing of these agreements, which will go a long way to instill knowledge and protect the environment. HRH Prince Ahmed entrusted the signing of eight agreements between Ertiqa and government agencies and private enterprises. The companies that signed agreements with the charity are Al Fozan Community Services; United Electronics – Extra; Saudi Aramco, Total Refining and Petrochemical – SATORP; Saudi Telecommunication Company – STC; Hail University, Microsoft Arabia; Tadweer National Environment Recycling Co.; and Sahara Net.

After the singings, Ertiqa’s partners were honored for their role in supporting the charity. These partners are Saudi Aramco; Western Digital; Deutsche Bank; the Ministry of Human Resources and Social Development; and the Ministry of Communication and Information Technology.