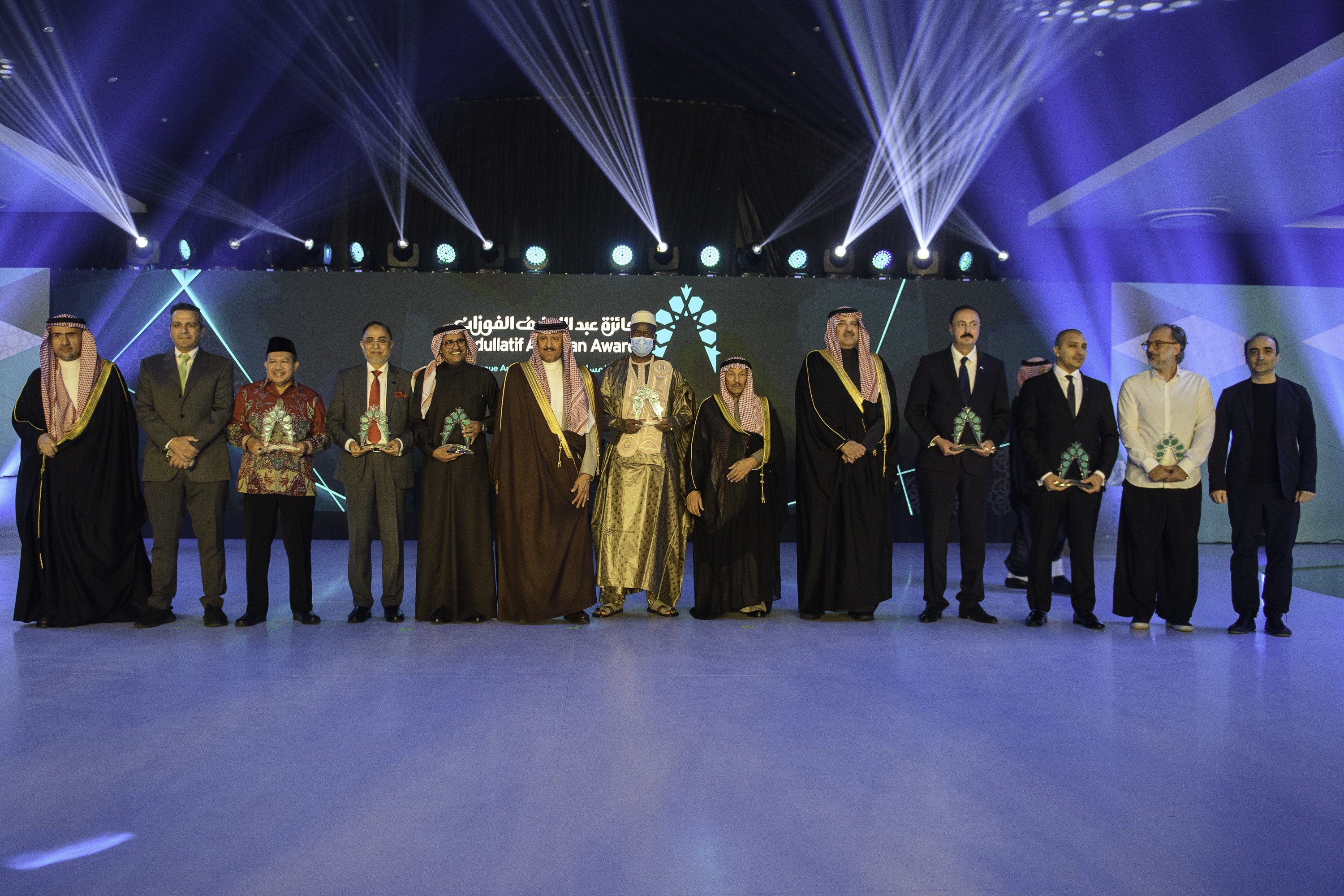 In the presence of Prince Sultan bin Salman, His Highness, Governor of Madinah, Sponsors The Closing Ceremony of The 3rd Cycle of Abdullatif Al Fozan Award For Mosque Architecture.

The Abdullatif Al Fozan Award for Mosque Architecture celebrated the honoring of 7 mosques that won the awards of the current third cycle for the period 2017-2020, which was announced during the ceremony organized by the Award in AlMadinah Almunawarah in the presence of His Royal Highness Prince Sultan bin Salman, Special Adviser to the Custodian of the Two Holy Mosques and Chairman of the Board of Trustees of the Abdullatif Al Fozan Award for Mosque Architecture, His Royal Highness Prince Faisal bin Salman, Governor of Al Madinah Region, the Founder of the Award, Sheikh Abdullatif bin Ahmed Al Fozan, and Mr. Abdullah bin Abdullatif Al Fozan, Chairman of the Board of Trustees of Al Fozan Social Foundation and Chairman of the Executive Committee of the Award, in addition to many royal personalities, eminences and dignitaries, along with a group of architects, experts and specialists in sciences related to mosque architecture from different countries of the world.

The seven winning mosques have been selected from 27 shortlisted mosques that competed for the Award out of a total of 201 mosques from Muslim-majority countries that were nominated for the Award by 43 countries on 3 continents. The Award traced the phrase "Mosque Architecture in the Twenty-First Century" as a slogan for the third cycle of the Award, with the aim of establishing a base and a broader vision of the levels of mosque architecture in the past, present and future.

His Royal Highness Prince Sultan bin Salman bin AbdulAziz stressed the importance of caring for Islamic sanctities and mosques, and expressed his appreciation for this great celebration. His Highness also praised the future role of mosques in terms of architecture, construction and the environment of the local community which is closely attached to the mosque, as the role of mosques is not limited to the technical and urban modernization aspects, but mosques are also connected with aspects of community transformation and its future vision, because mosques constitute the primary cultural vessel of the community.

His Highness also saluted the good land of Madinah, its citizens and its Governor, His Royal Highness Prince Faisal bin Salman bin Abdul Aziz Al Saud, His Highness the Deputy Governor of Madinah Saud bin Khalid Al-Faisal, and all the Principality’s apparatus and the security agencies in Madinah for this great effort.

His Highness looked forward to a future partnership between Abdullatif Al Fozan Award for Mosque Architecture and the Presidency of the Two Holy Mosques, noting that the press conference for the fourth cycle of the Award will be held in the State of Kuwait, while the Award ceremony itself will be held in Riyadh, the Saudi capital. His Royal Highness expressed his pleasure for the partnerships concluded with King AbdulAziz University and other Saudi universities, and the Presidency of the Two Holy Mosques, in addition to the international institutions.

Prince Sultan bin Salman praised the great efforts made by the Secretary-General of the Award, Dr. Mashary AlNaim, and the creative team, noting that Award is based on the highest quality standards that will enhance the status of the Kingdom, the land of the Two Holy Mosques and its civilization.

Dr. Mashary bin Abdullah Al-Naim, the Secretary-General of the Abdullatif Al Fozan Award for Mosque Architecture, expressed his pride in the generous sponsorship of the ceremony by His Royal Highness Prince Sultan bin Salman, Chairman of the Award’s Board of Trustees, who remained supportive of the Award and followed up with its successes and achievements at all the local levels, as well as the regional and international ones, and expressed his gratitude to His Royal Highness Prince Faisal bin Salman for his kind approval to host this ceremony in Madinah, noting that such sponsorship, tribute and presence during the ceremony are evidence of the government's keen interest in caring for the houses of Allah (mosques), and its support and encouragement of the efforts of the General Secretariat of the Award to spread Islamic knowledge and culture and enhance the values of Islamic Sharia.

AlNaim added saying that: "The Award aims to direct attention to the houses of Allah (mosques), their beauty and splendor, and seeks to restore the civilized role of the mosques as centers of creativity and enlightenment, praising the Award's efforts to maximize the advantage of paying attention to mosques by providing databases and scientific, architectural and technical information about them, and making them available for free to stakeholders and specialists, in addition to a number of reliable electronic platforms in different languages, which provide a rich stock of images, drawings, architectural forms and biographies of the pioneers of mosque architecture in the world.

The Award also organizes the International Conference on Mosque Architecture in order to encourage global research on mosque architecture, in addition to the global competition for mosques annexes, which is an evidence of the Award’s comprehensive attention it pays to the external and internal beauty of mosques.

The outcomes of the Award have been overseen by an international jury composed of specialists in architecture, urban planning, philosophy and sociology. The Award Executive Committee has previously held two meetings, first of which was in January 2019 at the headquarters of the International Union of Architects in Paris, in order to approve the short list of the mosques selected for the Award, and the second meeting was in Kuala Lumpur in November 2019 on the sidelines of the Second Scientific Conference on Mosque Architecture, in order to evaluate the technical reports about the selection of mosques nominated to win the awards of the current session.

It is worth noting that Abdullatif Al Fozan Award for Mosque Architecture is one of the initiatives of Al Fozan Social Foundation, which is concerned with developing and managing many qualitative initiatives that have a sustainable impact on the community and can empower it as well as serve the economy and the environment.