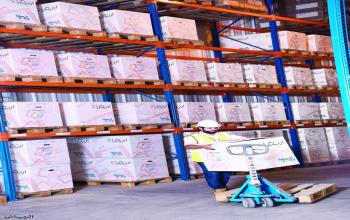 Society is always in need of initiatives, particularly those operating under government supervision that can help pave the road for a brighter tomorrow.

Electronic waste is among the ten most dangerous types of waste in the world as it contains compounds that destroy the environment, such as lead, mercury, cadmium, and phosphorous. The amount of electronic waste doubles year after year, which confirms the need for a radical solution to this problem.

This was the main motivation behind the establishment of Ertiqa, which is one of the most prominent charity associations specialized in collecting electronic waste. An initiative of the Al Fozan Social Foundation, it is a unique national charity that seeks to provide sustainable and professional services that spread awareness regarding recycling, preserving digital assets, and supporting intellectual and scientific advancement programs.

The idea of establishing Ertiqa came from international experiences in this field, and this idea was adopted by the Al Fozan Social Foundation until it became an official association under the umbrella of the Ministry of Labor and Social Development. The idea also fills an existing gap, as there is no right way to dispose of electronic waste in the Kingdom. Therefore, Ertiqa is a link between those who donate devices and those who need them.

Due to the nature of its work, the association considers the sensitivity of users’ information, as these devices may include private information such as files or photos, so it removes them using high-quality and highly accurate certified programs that erase all information from the device in a way that makes it difficult to recover. This is done at the headquarters of Ertiqa’ in Al Rakah, Al Khobar, which includes a warehouse for filtering and storing used devices and a laboratory where devices are refurbished and programmed by experts until they are ready to be packed and shipped.

Ertiqa has collected 20,238 devices since its launch, and more than 9,336 devices have been distributed, while 6,745 devices have been recycled. Ertiqa also contracted with a recycling company so waste can be converted into raw materials for other industries.

Ertiqa has supporters and partnerships with major international and local programming and computer companies, which enriches its work and makes it more professional and practical.

The association receives devices through its main headquarters in Al Rakah, Al Khobar, or via Saudi Post in specific offices in various provinces in the Kingdom without postage fees, or the Xtra branch in Al Khobar.

Ertiqa has achieved consecutive successes in this field as it offers a variety of services, including collecting used computers from individuals and various private and government agencies as well as refurbishing devices using its specialized technical staff, in addition to recycling damaged parts in collaboration with specialized companies and distributing refurbished devices among charities and social and educational facilities.

Electronic waste has become a global concern; the annual global amount of electronic waste is estimated at more than 50 million tons, with the Kingdom alone accounting for more than three million tons. Unfortunately, there is no clear or specific mechanism in the Kingdom for dealing with this waste, so it is thrown in landfills and ends up in the soil or water, particularly groundwater.