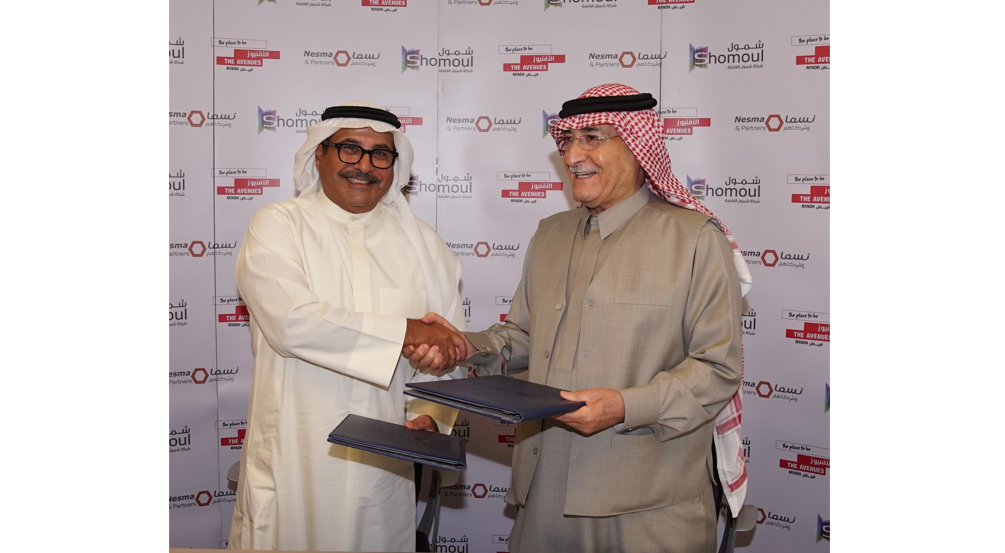 Shomoul Commercial, a subsidiary of Shomoul Holding, today announced the signing of an agreement with Nesma & Partners as a primary contractor to build The Avenues – Riyadh.

The project is expected to become one of the largest, most sought-after destinations for tourism and recreation in the world.

The SAR6.4-billion contracting agreement was signed at Shomoul’s headquarters in Al Khobar, Saudi Arabia, by Mr. Mohammed Alshaya, Chairman of Shomoul’s Board of Directors, and AbdulAziz Al-Turki, Chairman of Nesma & Partners, with board members and executives of both companies present.

“We are delighted to have signed with a major contractor in Saudi Arabia that specializes in mega projects such as as Nesma & Partners to build The Avenues – Riyadh,” said Alshaya. “This agreement is part of our efforts to acquire cumulative expertise so as to ensure that the project meets expectations.”

He added that the project is set to become a regional landmark that showcases the company’s expansion strategy to help meet the objectives of Vision 2030, which aim to make the Kingdom a world-class shopping and recreation destination. The $1.7-billion Avenues – Riyadh, he explained, would include a mall, parks, roads, and parking.

“We are happy to take on Shomoul’s contract to build a landmark as remarkable as The Avenues – Riyadh,” said Mr. Al Turki. “We look forward to a distinguished relationship and fruitful partnership for more great projects.”

Located on 390,000 square meters of land at the intersection between King Salman Road and King Fahad Road, The Avenues – Riyadh will offer 400,000 square meters of rentable spaces, including hotels, apartments, health care facilities, office structures, and 15,000-vehicle parking spaces, making it an ideal place to live, shop and have fun that also boost the local economy by creating tens of thousands of jobs in services and retail.