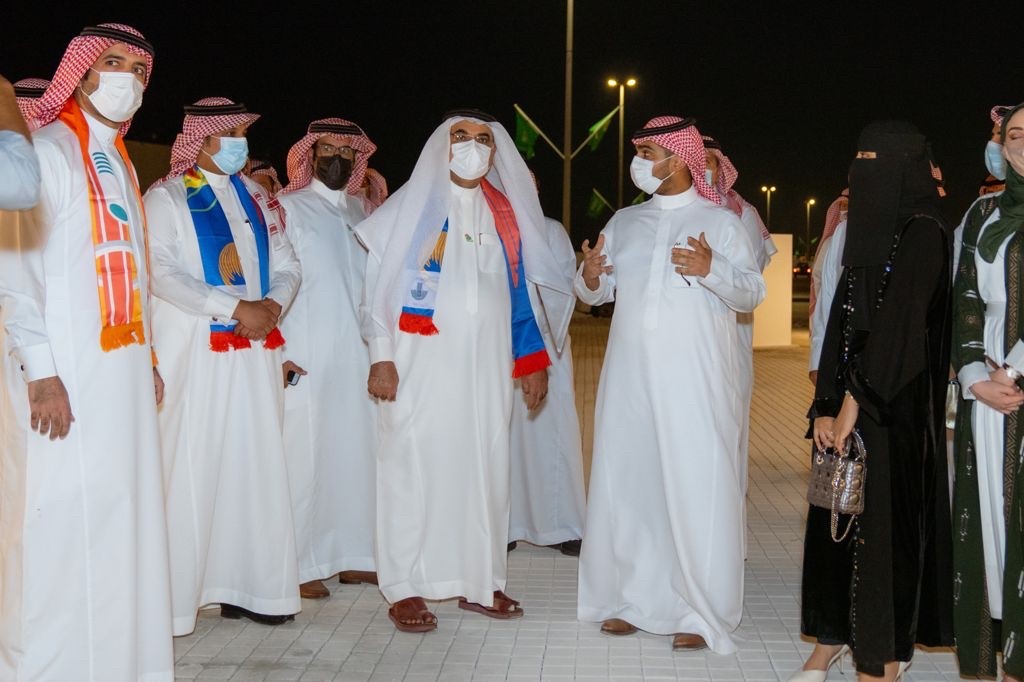 The MW Award, an Al Fozan Social Foundation initiative, has inaugurated the Al-Ardhah Square and Anan Al-Samaa Roundabout monuments, the winners of Mujassam Watan Award in its second cycle. The monuments were unveiled on the eve of the Kingdom’s National Day with the presence of Eastern Region Mayor Eng. Fahd bin Mohammed Al-Jubair.

Mr. Abdullah bin Abdullatif Al Fozan, the award’s Chairman, congratulated the Kingdom’s leaders and people on the occasion of the 91st Saudi National Day. He expressed happiness for the unveiling of the winning projects and thanked the Prince of the region for supporting creative talents; to contribute in the growth of the creative and artistic movement which comes as part of the Kingdom’s vision.

Mr. Alfozan thanked the award’s sponsors and the private sector in general for their role in supporting social initiatives and programs that improve the quality of life and instill the impact of social responsibility across the nation. He also thanked the Mayor of the region for his support of the competition and its contribution to the urban landscape and the beautification of the city.

Dr. Meshary AlNaim, the MW Award’s Secretary-General, said that official support of such initiatives demonstrates the Kingdom's commitment to helping the private sector in creating new environmental and cultural realities in line with the goals of Vision 2030, which include an architectural renaissance with modern projects that reflect the Kingdom’s culture and heritage in their design and character. Dr. AlNaim thanked the award’s team for the exceptional efforts they made over the past few months.

From his side, Eng. Hisham Al-Shaawan, MW Award’s Executive Director, thanked the Municipality of the Eastern Region and the leadership of Eng. Al-Jubair for their assistance with the facilities and permits required to complete the project, which enabled contractors to perform the necessary operations and maintenance to ensure the sustainability of the project.

The Al-Ardhah Square is an interactive public space encompassing an area of 1,500 square meters that represents the Saudi national heritage and popular art. Its 13 pillars represent the Kingdom’s regions and together form the Al-Ardhah Mural, a cornucopia of visual effects that brings the traditional dance to life in a modern representation.

The Anan Al-Samaa Roundabout design was inspired from His Royal Crown Prince Mohammad Bin Salman’s encouraging words for the achievement of Vision 2030. The monument comprises of two monoliths firmly affixed in the ground to represent the mountains of Tuwaiq, which symbolize the amalgamation of the Kingdom’s heritage and its future outlook.

Mujassam Watan is a national award launched in 2018 by Al Fozan Social Foundation, with the aim to shed more light on the talents of youth by giving them the opportunity to compete in designing creative, symbolic, and artistic landmarks that express national unity and the history of Kingdom of Saudi Arabia. The winning designs are built in one of the Kingdom’s public areas or squares and inaugurated on the Saudi National Day every year.

The unveiling was attended by Deputy to the Mayor for Development and Projects Eng. Mazen Bakhurji and Al Khobar Mayor Eng. Sultan bin Hamid Al-Zayidi, as well as a number of officials and representatives of private-sector sponsors, artists, creatives, and members of the media, together with citizens and expatriates who live in the region.