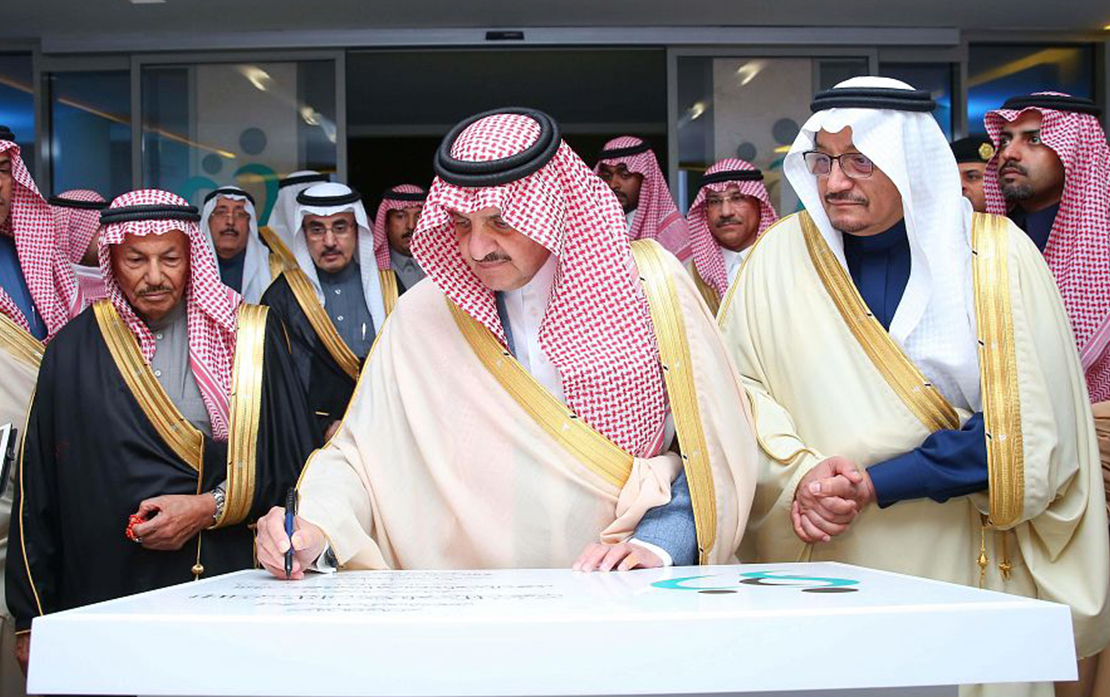 He noted that these large numbers of autistic youth deserve the state’s attention and emphasized the importance of spreading awareness among the society on how to deal with them, accept them, and integrate them into different segments of society in line with their capabilities. In cooperation with the Ministry of Education, the Al Fozan Social Foundation’s establishment of the Abdul Latif Al Fozan Autism Center, which is the largest of its kind in the GCC, embodies the principle of supporting public-private partnerships within the pillars of the Kingdom’s Vision 2030.

The governor added that the center’s infrastructure and technologies will be supported by specialists and teachers who will cater to the needs of youth affiliated with this center.

“Make your objective in this honorable work to please Allah by developing these youth’s awareness, catering to their needs, and making their families happy with what you offer,” he said to the teachers and supervisors who will be employed in the center.

To conclude his speech, the governor thanked Abdul Latif Al Fozan and his family for their efforts in creating the center, which is a model for autism centers and the most advanced of its kind on a global scale.

The governor has emphasized the state’s great devotion to bettering the lives of citizens as stipulated in Article 27 of the Basic Law of Governance that preserves the rights of citizens and their families during times of emergency, illness, disability, and aging – a strategy that has been ongoing since the establishment of the Kingdom by the late King Abdulaziz bin Abdulrahman until today. The state, along with its government and private agencies and the third sector, strives to enhance services that improve the quality of life programs and achieve happiness and growth for all segments of society.

As the patron of the ceremony, the governor signed a memorial plaque then took a tour of the center’s classes and departments as well as the exhibition prepared for this occasion, and he attended the signing of agreements with international partners to enhance the level of rehabilitation services in the center.

Chairman of the Board of Trustees Abdullah Al Fozan thanked His Royal Highness Prince Khaled Al Faisal for adopting this initiative as well as the governor for supporting the project since its early stages.

Attendees watched a film about the center and its features, followed by a speech by the Minister of Education, who praised the support and attention given to the education sector in the Eastern Province from the government of the Custodian of the Two Holy Mosques and the Crown Prince. He noted that the Eastern Province has many accomplishments in the education sector due to the governor’s meticulous attention to the field, adding that the center is a model of philanthropy from the sons of this province. He also thanked Sheikh Abdul Latif Al Fozan for this generous donation to the center.

He added that the Abdul Latif Al Fozan Autism Center in Al Khobar is the largest specialized and comprehensive autism center in the Gulf and one of the largest in the world to provide autistic children with quality services, in addition to rehabilitating and training these children’s families on how to deal with them according to the world’s latest educational methods and aids. The center was established in accordance with world-class standards in terms of design and equipment and it is run by specialists; revealing the great expertise of Al Fozan in launching community initiatives that serve the society and embrace inclusivity according to the objectives of Vision 2030 and the aspirations of the state to build a vital and civilized society.

The center targets autistic children who meet the criteria approved by the Ministry of Education. Children up to the age of nine will be taught by female staff, and the center will participate in local, regional, and international autism events.

This project comes within the framework of the social responsibility programs of Al Fozan Social Foundation, which has succeeded in launching several community activities and volunteer programs and initiatives rich in their value and social impact. The program has directed monetary and human resources and transformed them into balanced community work through initiatives and programs that benefit the community and support social development. The program devoted its efforts to highlight the direct and active role of the Saudi citizen in the Kingdom’s social development movement in general.

The Abdul Latif Al Fozan Autism Center was designed by Simon Humphreys, an engineer specialized in designing buildings targeting autistic individuals around the world. The center’s design is based on international standards to meet the specific needs of autistic children and how they respond to their environment; the building structure is balanced, quiet, organized, and simple, and the spaces in which the child moves are understandable, easy, free of complications, and use the least possible number of materials or colors to provide less distraction and isolation. The building is adaptable and provides room for flexibility and adjustments to serve autistic children in the future.

Built in Al Khobar on an area of 16,857 square meters, the cost of establishing the center exceeded 60 million SAR, and it will offer quality services as well as educational and rehabilitation tools for autistic children, in addition to training the children’s families on how to deal with them.