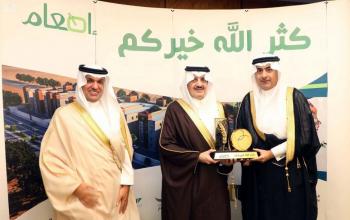 The Governor of the Eastern Province His Royal Highness Prince Saud bin Nayef bin Abdulaziz inaugurated the Eta’am Waqf Building today in his office at the Emirate Principality in the attendance of the chairman and board members of the Saudi food bank Eta’am.

The governor honored those who helped build the Waqf Building, praising the food bank’s achievements, activities, and role in raising awareness regarding the importance of preserving food.

The governor also signed off on the six millionth meal preserved by Eta’am and honored the two longest-employed women in the food bank’s central packing unit due to their role in serving the community since the establishment of Eta’am.

For his part, Eta’am Chairman Abdullah Al Fozan expressed his thanks and appreciation to the governor for sponsoring the inauguration of the building and everyone who helped finance and complete the project.

Al Fozan noted that Eta’am set its goals with high professionalism and successfully created a suitable environment for third sector institutions thanks to the generous support of the government of the Custodian of the Two Holy Mosques and the Crown Prince. He noted that Eta’am draws its approach from the inspiring legislation of the National Transformation Program 2020 to reach its desired objective.

“The governor signed off on the 200,000th meal in 2013 and sponsored the celebration of preserving one million meals in 2015, which gave us the perseverance to continue with the same ambition as the day we established this food bank. Today, we present the governor and the community with our achievement of more than six million meals enjoyed by more than 20 thousand beneficiaries from our beloved nation,” he said.

Al Fozan explained that the building, located in the Second Industrial City in Dammam, was completed at a cost of approximately SAR 27 million and with a generous contribution from the food bank’s board members, who devoted their money and time to sustain the food preservation project.

Eta’am was established in 2012 as an initiative by the businessmen of the Eastern Province. It is headquartered in Dammam and now features branches in Al Ahsa, Al Qatif, Al Jubail, Riyadh, and Jeddah.

Spanning 9,045 meters, the Waqf Building Project comprises a residential building for workers with integrated services as well as 10 connected buildings constructed according to the highest standards.

In 2015, Eta’am concluded a contract to lease the Waqf Building with Zamil Industrial for 10 years under the generous patronage of the Governor of the Eastern Province. The contract was signed by Eta’am Chairman Abdullah Al Fozan and Zamil Industrial CEO Abdullah Al Zamil, with an annual amount of SAR 5.5 million.

The general assembly of Eta’am voted to approve the Waqf Building and praised the efforts of the board of directors in sustaining the food bank’s work as well as financing and supervising its first Waqf project.