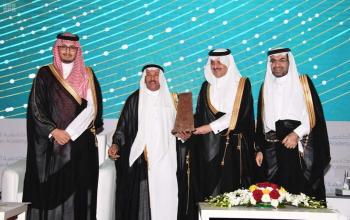 In a speech delivered during a ceremony held to commemorate this occasion, the governor stated: “Such institutions are tributaries of development and active partners in community and human development. It’s no secret that this sector is not limited to just one field, but rather has many forms; there’s charitable work done by philanthropists, community investments that seek to make an impact, and development projects that aim to reduce social problems. This sector, in its many forms, is a major contributor towards achieving the objectives of the National Transformation Program 2020, the features of which have begun to appear under the guidance of the Custodian of the Two Holy Mosques King Salman bin Abdulaziz Al Saud and the follow-up of the Crown Prince His Royal Highness Prince Mohammed bin Salman bin Abdulaziz.”

He affirmed that the private sector’s endeavor to build sustainable partnerships touches on the developmental needs of society and is an important matter in making a difference for a bright future by realizing the Kingdom’s Vision 2030 to create a vibrant society with firm values, a prosperous environment, and a solid structure. “Many efforts in different sectors have disappeared due to a tendency to work individually, therefore suffering from many shortcomings. This is why efforts that arise from partnerships are effective and impactful and achieve tangible results,” he added.

The governor noted that this partnership between the Al Fozan Social Foundation and King Fahd University of Petroleum and Minerals proves both parties’ awareness of the importance of establishing sustainable partnerships with long-term impact. He noted that the academy touches on the needs of the non-profit sector and strengthens its leaders, and will benefit the sector, the university, and the community as a whole. He thanked Abdullatif Al Fozan for his charitable initiatives and efforts for his nation and society, and he also thanked the President of King Fahd University of Petroleum and Minerals Dr. Khaled bin Saleh Al Sultan and the university’s staff for their tireless efforts to enable the university to play its pioneering role.