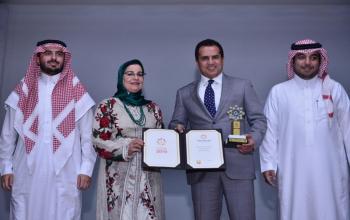 The Saudi food bank Eta’am won the award for Best Arab Charity for the year 2019 at the Arab Best Global Awards Festival in the annual ceremony held by the general secretariat of the award in Marrakech, Morocco.

Chairman of Eta’am Abdullatif bin Abdullah Al Rajhi received the award in the attendance of the members of the award’s board of trustees and a large number of leaders and officials of Arab companies and NGO’s, as well as a crowd of officials and guests.

Held for the fourth year in a row in Morocco, the annual Arab Best Global Awards Festival targets more than 12 commercial, industrial, and investment sectors, with awards for executive leaders and one award dedicated to charitable and humanitarian work.

Al Rajhi praised the support Eta’am receives from the Governor of the Eastern Province Prince Saud bin Nayef bin Abdulaziz, the Deputy Governor Prince Ahmed bin Fahd bin Salman bin Abdulaziz, the Minister of Labor and Social Development Eng. Ahmed bin Suleiman Al Rajhi, and all Eta’am’s institutional and individual partners, at the forefront of which are the Food Preservation Alliance for the year 2019 and the food bank’s employees and subscribers.

“Every achievement accomplished by Eta’am is supported by the Governor of the Province, the Deputy Governor, and the Ministry of Labor and Social Development, who are the instigators of charitable work in the Eastern Province. We are grateful for the constant and generous care that pushed Eta’am to the forefront of charitable projects in the Kingdom and the Arab world,” he stated.

Chairman of Eta’am Abdullatif bin Abdullah Al Rajhi received the award in the attendance of the members of the award’s board of trustees and a large number of leaders and officials of Arab companies and NGO’s, as well as a crowd of officials and guests.

He added: “Every new achievement doubles our responsibility to continue to grow and advance in our mission to preserve food, avoid waste, and provide the best services to beneficiaries. Eta’am continues to implement several food initiatives by drawing its strength from its team in all its departments and branches.”

He also pointed out the constant support the food bank receives from the Ministry of Labor and Social Development and its branch in the Eastern Province.

For his part, Secretary-General and CEO of Eta’am Faisal Al Shawshan stated: “Receiving this award and having our food preservation mission enlisted in public educational curricula are both a valuable addition to our work in 2019 and in actively facing the challenges of the social development sector in the Kingdom.”

Eta’am was established in 2012 in Dammam as the first food bank in the Gulf. It has branches in Al Jubail, Al Ahsa, Riyadh, and Jeddah, and every year it saves more than three million meals from waste. It also implements quality food-related projects and distributes surplus food among beneficiaries with the highest quality standards. It currently employs more than 180 employees.

Licensed by the Ministry of Labor and Social Development, Eta’am carries out more than one thousand volunteer hours for individuals and institutions every year. It contributes to providing beneficiaries with food aid through collaborations with restaurants, hotels, wedding halls, and food companies through six production lines that provide suitable job opportunities for trained national talents.

Eta’am has the HACCP accreditation for food quality control, which ensures that all its preservation activities are done according to the highest food safety standards.