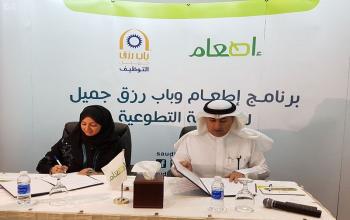 The Saudi food bank Eta’am signed a cooperation agreement with the Bab Rizq Jameel initiative to launch the second season of the Eta’am and Bab Rizq Jameel Volunteer Program at the Novotel Hotel in Dammam. The program provides more than 600 volunteer food preservation opportunities for Saudi women and girls during the holy month of Ramadan in the Eastern Province.

The agreement was signed by Eta’am Board Member and Treasurer Faisal bin Saleh Al Quraishi and Senior Director-General of the Bab Rizq Jameel initiative Rola Basamad.

The agreement seeks to stimulate the volunteer sector in line with the general objectives of the Saudi Vision 2030 and the National Transformation Program and to provide hundreds of volunteer opportunities for girls in the field of food preservation during Ramadan, in addition to increasing the operational capacity of Eta’am’s field teams through Bab Rizq Jameel’s contribution in supporting Eta’am to preserve untouched food surplus and distribute it among the food bank’s beneficiaries. The agreement also aims to drive a sustainable qualitative partnership in community service and portray an accurate depiction of the work of third sector institutions.

Al Quraishi explained that Eta’am’s first experience with Bab Rizq Jameel during the last season achieved positive results, as more than 900 volunteers came to Eta’am last Ramadan; thereby motivating the continuation and development of the program to achieve its desired benefits. He noted that the latter is the fruit of Eta’am’s partnership with Bab Rizq Jameel in its pursuit to achieve many qualitative and noble initiatives, particularly with the prominent presence of Bab Rizq Jameel in the charity sector.

Basamad confirmed that the success of the program’s first season and the numbers that came out of the partnership make Bab Rizq Jameel keen to continue the partnership with Eta’am. She praised the role of the food bank in preserving food and the professionalism with which it is managed, noting that Eta’am is one of the tributaries of charity work in the Kingdom due to its presence and expansion.

Executive Director of Eta’am in the Eastern Province Faisal Al Shushan stated that the project will be launched on the ground at the beginning of Ramadan and will continue until the end of the holy month, as it targets 600 volunteers in Dammam, Al Khobar, and Dhahran.