Eta’am Preserves Half a Million Meals in Three Months 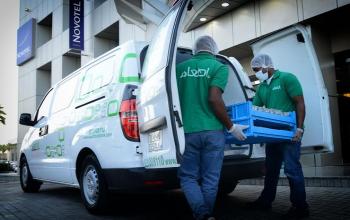 The Saudi food bank Eta’am revealed its first quarter results for the year 2016, confirming its success in preserving more than 479 thousand meals and registering a 248% increase compared to the first quarter of last year. The food bank explained that its field teams preserved this number of meals after daily follow-up with hotels and wedding halls and receiving requests through all communication channels in the main center in Dammam and the rest of the branches. Riyadh registered 198,144 meals, the largest number of meals preserved during the first quarter, followed by Dammam with 117,679 meals, Jeddah with 103,157 meals, Al Jubail with 24,214 meals, Al Ahsa with 22,322 meals, and Al Qatif with 14,183 meals.

The quarterly report included the results of several statistics and figures related to the activities of Eta’am during the first quarter of this year. It signed 11 cooperation agreements with educational, tourism, and leisure sectors, in addition to banks, hotels, and restaurants across the Kingdom. The first quarter witnessed a noticeable growth in the educational events and programs held by the food bank, as 20 educational events were held in several universities, exhibitions, hospitals, and commercial markets, while eight school programs were organized by receiving student delegations and organizing field visits to schools in the Eastern Province and Riyadh.

In regards to training and development, Eta’am completed five training programs for employees and workers, which tackled administrative and occupational aspects as well as personal development within the Eta’am Training and Development Program. The food bank also trained a group of students from the College of Applied Studies at the University of Dammam, in addition to launching the Ajyal Eta’am Program in cooperation with the General Department of Education in Riyadh.

On the investment front, the food bank completed 80 percent of the Waqf Building in Dammam while the final plans are being reviewed for the Eta’am Administrative Building in Dammam. Eta’am also attended several important youth and sports events as it signed three cooperation agreements to spread the food preservation culture with the Al Qadisiyah, Al Nasr, and Al Ahli clubs. It also participated in several national sporting events held under the supervision of the General Presidency of Youth Welfare.

Eta’am announced the readiness of its field teams to continue working in the second quarter of this year, which will feature the holy month of Ramadan. It also confirmed the continuation of the food preservation programs and events in Al Sharqiyah, Riyadh, and Jeddah.

Eta’am was established as a food preservation initiative by the businessmen of the Eastern Province. Its main center is located in Dammam and it has branches in Al Ahsa, Al Qatif, Al Jubail, Riyadh, and Jeddah.