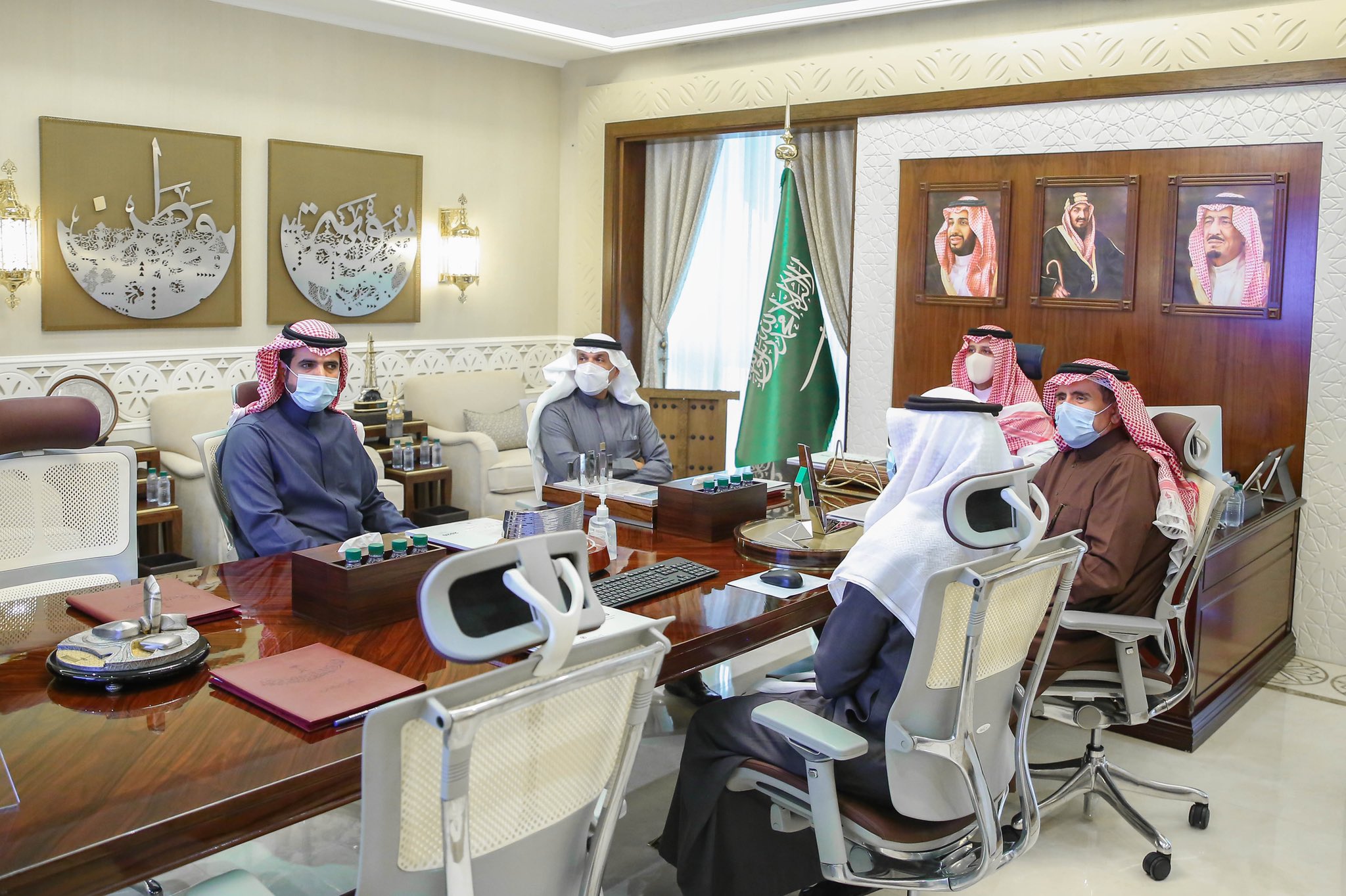 His Royal Highness Prince Ahmed bin Fahad bin Salman, Deputy Governor of the Eastern Region, welcomed today in the premises of the Principality the “Mujassam Watan” competition team, in the presence of the competition’s Chairman of the Board of Directors, Abdullah bin Abdullatif Al Fozan, for the sake of discussing the launch of the fourth cycle of the Mujassam Watan competition.

His Highness was also briefed on the projects implemented in the competition's second cycle and the winning projects of the third cycle, as well as the sites of the fourth cycle, which geographically extended to reach new cities. The Mujassam Watan competition is currently running in coordination with the Quality of Life Program in order to build new monuments in the various regions of the Kingdom.

His Highness praised the efforts of Mujassam Watan team and those in charge of Al Fozan Social Foundation for creating such competition that adds value to the cultural portfolio, stressing that the competition has become one of the projects that contribute to the development of the urban and aesthetic landscape in the region.

Mr. Abdullah Al Fozan expressed his appreciation to HRH, Deputy Governor of the Eastern Region, for his constant support to the competition. He also praised the concerned municipalities for their cooperation to identify the suitable sites, obtain the necessary licenses, and provide supporting set-ups for the projects implementation. He added saying that the competition has achieved its competitive objective, as many amazing designs were showcased, indicating that the goal of these initiatives is to involve citizens and expatriates in the process of spreading the culture of artistic monuments, in addition to the improvement of the urban landscape in line with the objectives of the Kingdom’s Vision 2030.

Al Fozan indicated that the 92nd National Day will feature the launch of the winning projects in the third cycle of Mujassam Watan competition, namely Al Sadu and Ubayyah. Al Fozan went on saying: "This year will witness the lunch of Al-Sadu Project whose design bears the symbolism of boosting the Saudi cultural and historical heritage, as Al Sadu represents an essential allegory in the Kingdom's cultural face, and the art of Al Sadu was recently included in the UNESCO's list of symbolic cultural heritage. Furthermore, Al Sadu was included in the Kingdom’s emblem while hosting the G20 Summit, reflecting deep belonging and identity of the Kingdom’s cultural heritage where its importance and value go in line with the Kingdom's strong economic position and weight.

As for the Ubayyah Project, it was nominated to symbolize the status of the Kingdom during the reign of King Salman Bin AbdulAziz, and the progress that the Saudi community is celebrating with great pride, in view of the Kingdom 2030 Vision. Ubayyah is celebrated as one of the most famous horses of King AbdulAziz, his passion for this horse was intense, and he held her dear to his heart. For him it was a loyal companion during the battles he fought to unify the kingdom. The founder chose Ubayyah over other horses to accompany him during the conquest of Najd.

Mujassam Watan is a national award launched in 2018 by Al Fozan Social Foundation, with the aim to shed more light on the talents of youth by giving them the opportunity to compete in designing creative, symbolic, and artistic landmarks that express national unity and the history of Kingdom of Saudi Arabia. The winning designs are built in one of the Kingdom’s public areas or squares and inaugurated on the Saudi National Day every year. Several winning monuments were launched in the previous cycles, including Al Biraq Roundabout, Al Ardah Square, and Anan Alsama Roundabout. Work is currently underway to launch the winning monument in the 3rd cycle, namely those of Al Sadu Roundabout and Ubayyah Roundabout.